This play report will contain all the SPOILERS for Sleeping Place of the Feathered Swine. Review incoming at some point.

The party's last session into the cave ended mid-delve with Heidi infected by awful worm tumors and Claus in serious danger as another burst out of the depression he was investigating in Room VIII. Claus figured he'd come back and have worms coursing through his flesh in short order.

Luck was on the players' side, however, and not only was Claus not surprised but Barthelm won them initiative! The party murdered the once-man in short order and collected themselves. None of us could remember if they'd gotten the blackfire bombs or not so I gave it to them because explosives are awesome and a great potential way for PCs to kill themselves.

After the excitement died down they posted up in the cave, set a bear trap at each exit, and set about trying to figure out if they could cure Heidi. When Heidi got infected her roll on Logan Knight's Body Horror table (which will disappear at some point) ended up on "genitalia" so no chance of amputation saving her. Their plan ended up with fetching Aspeth (NPC) to do experiments on her to better their odds of something working on Heidi without killing her. Aspeth had been guarding her unconcious friend Felix the Shitty Wizard (NPC) but left him once Barthelm convinced her they were going to try and save her. Felix was unconscious because he fell down the pit in Room IV and went to just enough negative HP to be out for hours but not dead. This fall would prove pivotal later on.

Claus took point, I think partly because Claus is a magic-user but also potentially because Claus' player had previously worked as an exterminator. Overlap? Maybe. Their first attempt was to try and find some fat or lard or something to rub over the flesh where parasitic worms were, the rationale being that some parasites suffocate to death when denied oxygen. They had a heck of a time finding a suitable material in their gear but eventually came up with something that was close enough. I thought the idea was good but since they don't die inside the swine's cysts I figure it only slowed them down a bit instead of killing the worms. I gave an extra exploration turn or two delay before the worms spread further in the body. If nothing else, I think it taught them that carrying items they can get creative with is important.

Digression: suffocating parasites with grease and fat is apparently a thing! I should write a post about parasites at some point.

The next strategy was to kill it with fire. Aspeth had cut her infected leg off and cauterized the wound but Claus wanted to take it a step further and apply the burning directly to the wound with the worms. At this point Heidi's infestation had spread a bit, so they gave up on proving ideas out on Aspeth and went straight for parallel applications. They emptied out the gunpowder from one of Heidi's apostles (shot bags) directly onto her worm infection and lit it up. I really liked this idea and this is how we played it out:

The more damage they can take the more likely they are to kill an infection. In retrospect, I should have maybe given the worms a d6 or something to make them a little harder to get rid of. Watch out if you play in a one-shot with me! In this instance the worms rolled well and although Heidi took some damage the worms didn't seem to suffer for it. They tried a torch on Aspeth, and she didn't get helped much either.

Resigned to her fate, Heidi pushed to explore the rest of the caves before her time was up. They went for the "rotting hair, sour skin" smelling branch (Room X) as opposed to the "acrid smelling, low vomiting sound" branch (Room IX) which maybe saved them a few more loses. They reset their bear traps to both be in front of Room IX and went towards the other end. Barthelm stayed behind a moment to end Aspeth's life, at her request, and hurried to catch up to the rest. This is what greeted them in the next room:

The creature's mass slowly rose and fell in the deepest of slumbers. Barthelm failed his stealth roll but luckily the feathered swine did not awaken. He was carrying all three vials of sedative from Aspeth and attempted to inject them, one at a time. The base chance of success is 3-in-6, which he just made with a 3. I wasn't thinking they would dump all the sedative, but since they did I gave them an additional 1-in-6 for each one that was already in. The third dose, at 5-in-6, almost woke the creature up, but Barthelm got his 5.

The creature had 25 translucent, worm-filled cysts dangling from its flesh and Barthelm greedily harvested them all. I gave him three re-rolls, one for each dose of sedative, and he ended with one in reserve. Twenty-five worm-bearing cysts should be more than enough to satisfy the peculiar demands of Wilhelm the Wily, the wizard that they had bargained with for help. Claus wanted to try one last time to cure Heidi, however, and narrowly avoided getting infested with worms himself when he attempted to extract some of the liquid from one of the cysts. I don't recall if his winter gloves saved him or not, but it was a good precaution. After that no one wanted to mess with the cysts and the party headed out, collecting their bear traps along the way (because of course).

The only obstacle remaining on their exit was the hole that Felix fell down on the way in. A twenty foot drop is nothing to sneeze at, especially at low levels. The party reasoned to set up a safety line along the edge of the pit. Barthelm handily crossed, tied off the rope, and then James (Barthelm's player) stepped away from the table for a moment.

Everyone else crossed the pit pretty handily, even with the unconscious Felix. After everyone had crossed, I half-jokingly asked "What, no one's going back for the rope?"

Helga, emboldened by their success so far, said "Yeah of course, I'll go untie it!" She made it over, untied the rope, and started back aided by only her natural ability. The mechanic is written as roll under Dex, so she only had to roll under a 16.

2d6 came up 12.  Twelve damage put Helga down to -3, and in LotFP that means you've got 1d10 minutes before you're dead with nothing able to save you. Barthelm's player came back, did not believe any of us that Helga fell to her death going back for the rope. "Why would you go back for the rope?!"

Heidi said some very poignant farewells as she prepared to descend into the pit with Helga. "You were always a light in the dark, you should not die alone in the dark." Barthelm gave her a torch, Claus gave her his pistol, and Heidi climbed down. She tied off her gear, signaled to bring up the rope, and watched her friends leave.

"I wish I could have been outside, I always loved the trees and walking in the forest with my father." (Heidi)
"That was deep." (someone)
"Yeah that hole was very deep." (Helga)

As they exited the cavern Claus and Barthelm weren't sure if they could hear the crack of Claus' pistol or if it was just their imagination. Down two party members and with the additional burden of an unconscious Felix it would be down to the wire for Barthelm and Claus to make it back in time to their rendezvous point . If they didn't return within five days there was no guarantee  a that theptain who would take them back to Wilhelm the Wily would still be there. Luckily nothing interrupted their journey and we ended the session.

ps: I thought I messed up with Claus and Barthelm having to carry Felix all the way back to the boat because he only should have been unconscious for 1d6 hours. However, for him to get back enough HP to be able to walk with them they would have had to do nothing but rest all day for a couple of days, making them miss their rendezvous anyway. So in the end, no harm no foul.

pps: This was Heidi's worm status at the end of the session. Every circle is a "forearm sized" chunk of tumultuous, writhing worm shapes seething beneath her flesh and boring through the bone and tissues beneath her skin. 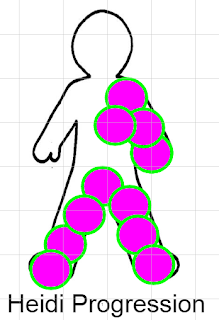 SPOILERS FOR MY PLAYERS. Don't read this if you want to maintain lack of knowledge about what Heidi did after going into the pit, even though I don't personally really care.

Heidi stayed with Helga until the last breath left her. Then she got up, Barthelm's torch in one hand, a candle in the other, pistol through her belt, and went exploring. Her aim was to see what else she could find in the cave, maybe give what remained of her life some final meaning.

She skirted the edge of the swine's cave and discovered a small alcove full of luminous mushrooms swaying like the sea and the sound of running water. She bathed in the water and relaxed, accepting her imminent death but now even more resolved to do something with the time left. Her dip in the stream calmed the worms below her flesh but only until she got out again.

The reverie was broken when Heidi moved to exit the calming side cave because she saw, tucked into the corner, the most hideous shit of armor imaginable. Blasphemous and utterly grotesque imagery adorned it's every inch down to the tiniest detail. Even more disturbing was that the body within the armor, while shrunken, did not seem rotten or dessicated in the slightest; instead, the flesh seemed supple still but drawn in and wide open eyes stared straight ahead at the doomed warrior.

Not wanting to delay beyond the briefest examination, Heidi continued to the corridor that the party had protected themselves with bear traps (Room IX). Inside she encountered too of the worm tumors vomiting impossible amounts of worm-filled gore into the mouth of a still-living member of Felix's party. Finding the battle she craved, Heidi draw her spear and approached.

The slavering man-things had a difficult time landing a blow on Heidi. Chainmail, a shield, and maybe even a Dex bonus made her quite resilient, giving her time to kill one of them before finally succumbing to their assault.
Posted by qpop at 1:19 AM